MORGAN WALLEN ANNOUNCES 2023 ONE NIGHT AT A TIME WORLD TOUR

ERNEST & Bailey Zimmerman Join All Dates in the U.S. and Internationally with HARDY and Parker McCollum Joining Select Dates

$3 of Every Ticket for U.S. Dates Benefits Morgan Wallen Foundation 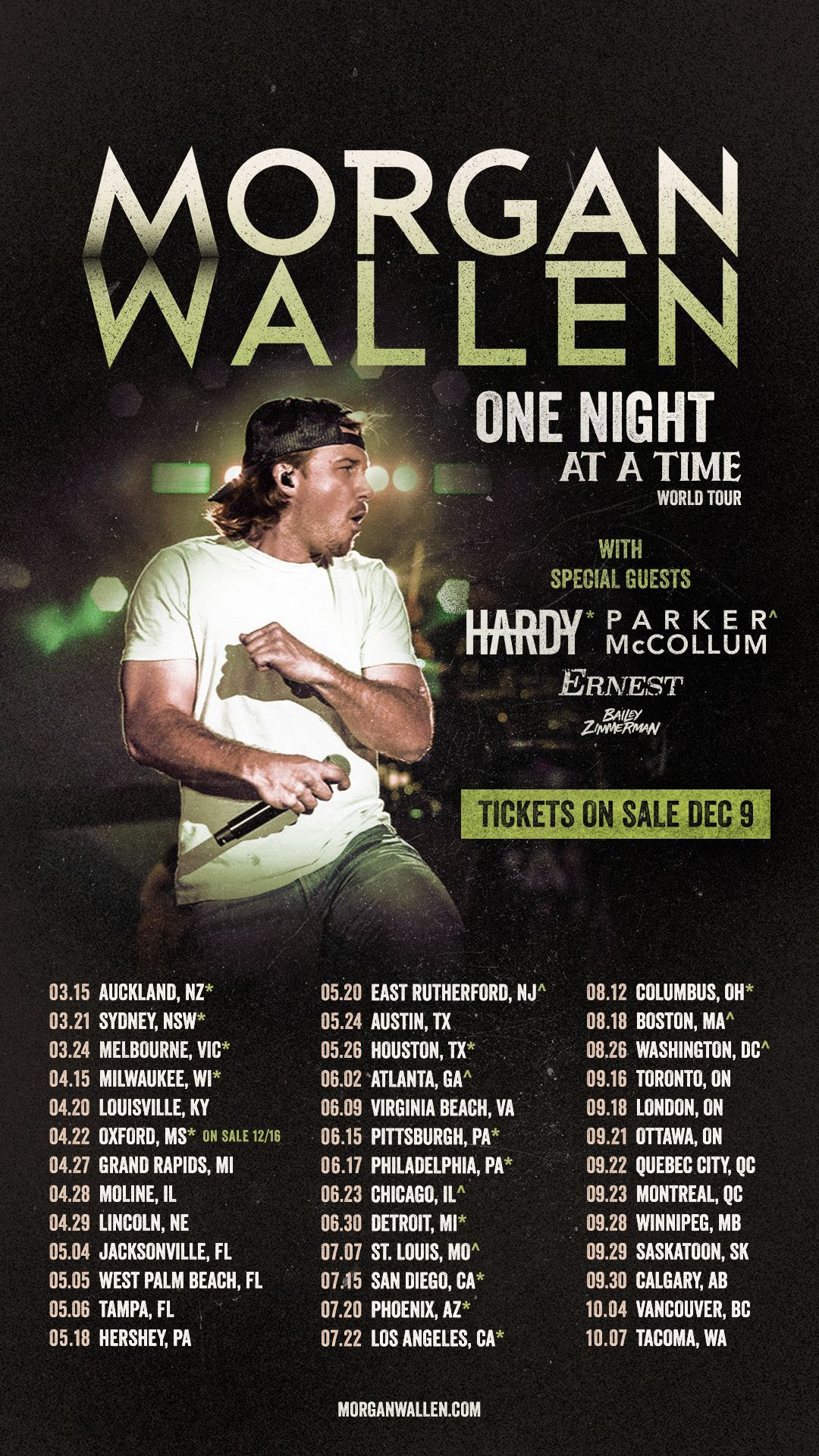 NASHVILLE, TENN. – Morgan Wallen admittedly treats his tours like an athlete approaching a new season, so when the East Tennessean wrapped his wildly successful 55-city Dangerous Tour on Oct. 8, no one expected he’d come with a line-up of more shows this soon. Yet, the ACM Milestone Award Winner and only country artist nominated for Pollstar‘s Major Tour of the Year award revealed this morning he’s not only expanding the size of the venues he’s playing, he’s traveling around the globe to see his fans in 2023!

Morgan Wallen’s One Night At A Time World Tour, produced by Live Nation in North America and Frontier Touring for Australia/New Zealand, kicks off overseas March 15-24 with shows in New Zealand and Australia with HARDY before returning stateside on April 15 at Milwaukee’s American Family Field with HARDY, hitting New Jersey’s MetLife Stadium, Chicago’s Wrigley Field and Boston’s Fenway Park with Parker McCollum, before wrapping on Oct. 7 at Tacoma Dome in Washington. ERNEST and Bailey Zimmerman will support across all dates, U.S. and internationally. Thirty-nine dates in total with 17 stadiums, amphitheaters, and arenas to boot. Tickets on sale at MorganWallen.com beginning Friday, Dec. 9.

Wallen named his tour after one of three new songs dropping tonight at midnight on his One Thing At A Time – Sampler: “One Thing At A Time”; “Tennessee Fan,” paying homage to Wallen’s East Tennessee upbringing; and “Days That End In Why.” Together, these three songs serve as the first taste of what’s to come from his time in the studio and arrive on the heels of his new single at country radio, “Thought You Should Know,” cowritten with Miranda Lambert and Nicolle Galyon, currently sitting Top 20 as his latest No. 1 “You Proof” returns to the top of the charts for a rare sixth, non-consecutive weeks atop the Country Airplay chart.

“Man, what a year 2022 has been with the Dangerous Tour. I had the time of my life, and I cannot begin to express how grateful I am that my fans connected with the Dangerous album the way they did,” Wallen shares. “I’ve had so many people ask me if I wanted to take some time off; but the truth is – I have been writing and making so much music in my off-time because I feel as inspired as I ever have. It feels like new songs are pouring out of me, and I love that feeling. We are going to run it back next year with the One Night At A Time World Tour. Bigger venues. New countries. Bigger memories. See y’all there.”

As one of the biggest artists in the world with Dangerous continuing to notch historical chart status as Billboard’s longest running Top 10 album in history for a solo artist (eclipsing Adele’s 21 and Bruce Springsteen’s Born In The USA), the 2022 American Music Awards‘ Favorite Male Artist and Favorite Country Song winner adds, “Also, I’m not quite done making this new album, so I’m going to keep making it through the holiday break and early January to chase this inspiration. I promise I won’t wait too long to reveal the album details. To hold you over, I’m dropping three new songs today as a sampler of what I’ve been working on. Can’t wait to take it one night at a time in 2023.”

Wallen’s 2022 Dangerous Tour spanned over 50 shows and broke records in 30 venues across the country during its 8-month-long run. Highlights include his historic Globe Life Field show, which became the fastest sellout in the venue’s history and surpassed attendance records previously held by artists such as Elton John and Lady Gaga, and holding fastest historical sellouts at 11 venues, while simultaneously breaking attendance records with stops at XFINITY Theatre, AmericanBank Center and Darien Lake Amphitheater.

As on his Dangerous Tour, $3 of every ticket sold for U.S. dates benefits the Morgan Wallen Foundation which funds causes close to his heart and, to-date, has supported organizations such as Greater Good Music by donating over 500,000 meals-and-counting, to Children Are People, the Salvation Army and National Museum of African American Music.

There is no official pre-sale in the U.S. for this tour, so fans are advised to only purchase through verified fans. For more information, visit www.morganwallen.com. Morgan Wallen Fan Club pre-sale for Australia and New Zealand shows begins on Wednesday, Dec. 7.