ERNEST CRANKS UP THE COUNTRY NOSTALGIA WITH “AMERICAN RUST” 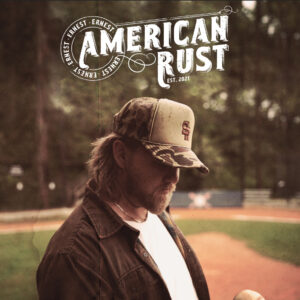 FOLLOWS HIS FOURTH CHART-TOPPING HIT AS A SONGWRITER

A nod to small-town love and life, the track tributes all the things that keep on getting better with time, from the backstop on the old ball field, to Chevrolets and diamond rings. “American Rust” is penned by ERNEST, Rodney Clawson and Jordan Reynolds, and produced by ACM Producer of the Year nominee Joey Moi.

“American Rust” follows ERNEST’s 2020 release “Cheers,” and comes on the heels of his fourth #1 hit as a songwriter, “Breaking Up Was Easy In The 90’s” (Sam Hunt). Previously notching credits on #1s including RIAA GOLD “I Love My Country” (Florida Georgia Line), RIAA PLATINUM “More Than My Hometown” (Morgan Wallen) and RIAA PLATINUM “Big, Big Plans” (Chris Lane), ERNEST has become one of Music City’s most sought-after songwriters, while carving a unique path as a Country artist in his own right following his 2019 debut Locals Only.

Currently in the star-studded second season of his “Just Being ERNEST” podcast, the hyper-creative entertainer gets behind the mic weekly to provide a platform for relaxed conversation – tied together by his signature sense of humor and eccentric personality. High-profile past guests include Jason Aldean, Keith Urban, HARDY, Lauren Alaina, Diplo and more. Listen to “Just Being ERNEST” here.

Hitting the road this summer, he will perform a two-night set for A Weekend With ERNEST at Tin Roof Myrtle Beach on July 10 and 11. Taking the stage on July 30 at Tailgates N’ Tallboys in Taylorville, IL, he’ll play for a hometown crowd at Blended Festival in Nashville on August 14. For tickets and more information, click here.